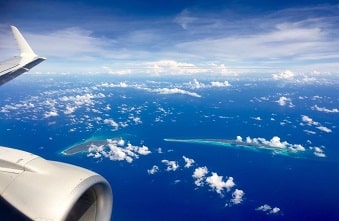 “Turks and Where?” is often the response when telling someone where you live. It may be hard to believe but the Turks and Caicos Islands are just one short flight from most cities in North America and Turks and Caicos flights are just at your fingertips… Only 90 minutes from Miami or three and a half hours from New York, escaping to paradise doesn’t have to be an arduous journey. A quick hop with some spectacular aerial views along the way and you can feel like you’ve landed on another planet entirely.

So where are we? Niched in the northern Caribbean Sea between the Bahamas to the north west, and the Dominican Republic to the south, the Turks and Caicos Islands archipelago of 40 islands is part of the British West Indies, surrounded by the third largest barrier reef in the world.

The main tourist island of Providenciales, and home of TripAdvisor’s #1 Grace Bay beach, currently receives direct flights from Atlanta, Boston, Charlotte, Chicago, Dallas, Fort Lauderdale, Miami, New York, Newark, Philadelphia, Washington D.C., and many other spots in the United States. Canada has non-stop flights from Toronto, and there is a twice weekly flight from London (Gatwick) via Antigua. Visiting other islands from Turks and Caicos is also easy with flights to Nassau, Cuba, Jamaica, Haiti, Dominican Republic and Puerto Rico.

Upon arriving on the island, all-inclusive Alexandra Resort is only a 15-minute drive from the airport and centrally located in Grace Bay. The resort is right on the beach, making sandy toes just a few footsteps away…

✨Did you know there is excellent snorkelling rig